WINDSOR – For the 33rd consecutive year hundreds of people and dozens of organizations across the community came together to make the Battle of the Hors D’Oeuvres a BIG!! success.

The nearly 600 people who packed the Augustus Ballroom at Caesars Windsor – our Presenting Sponsor; enjoyed the opportunity to sample some of the best food and beverage that our community has to offer in one of the BIGGEST!! food competitions in Windsor-Essex.

Becky Parent, Executive Director of Big Brothers Big Sisters of Windsor Essex talked about the breadth of the stakeholder engagement for the event:  ”Battle of the Hors D’Oeuvres is our Biggest fundraiser of the year, the proceeds of the event support over 800 children in our region with impactful mentorship services. It was amazing to once again see the community come together through this incredible event and re-invest in the children of our region.” 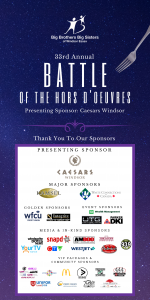 In addition to the nearly 600 attendees, there were 19 food and beverage Battlers who donated time and product to make the event a reality. There were dozens of sponsors who supported the event as well.

Kieran McKenzie Director of Development and Donor Relations for Big Brothers Big Sisters of Windsor Essex talked about how “Battle is a galvanizing community event that showcases so many positive aspects of what we, as a community are about. In this case we leveraged our amazing culinary scene to support our work at Big Brothers Big Sisters of Windsor Essex. I am consistently amazed at the way in which we come together in our region, supporting each other to achieve great things like igniting potential in our young people.” 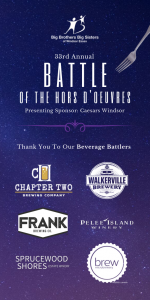 THANK YOU TO OUR BEVERAGE BATTLERS

This year’s Battle event introduced a Beverage Battle for the first time in the event’s 33 year history. Six of the best Craft Beer and Wine producers of the Windsor-Essex region competed for the Big Mentorship Cup. Sprucewood Shores Estate Winery took home the hardware but the competition was hotly contested with Chapter Two Brewing Company, the Pelee Island Winery, Brew Microbrewery,

There was strong consensus that collectively this was the best Food Battle in the event’s 33 year history with some of the best food organizations in the region entering the competition.