In the on-going quest to fulfill its mission ensure that every child in our community who needs a mentor has a mentor, Big Brothers Big Sisters of Windsor Essex (BBBSWE) recently made a #Big announcement. January of this year marked the beginning of an exciting new partnership with Cardinal Carter High School/Middle School and the RBC Future Launch Program who collaborated with BBBSWE to expand its Teen Mentoring programming to the Leamington based schools.

f the Teen Mentoring program to Cardinal Carter would not have been possible without the generous support of RBC, who through its Future Launch initiative is partnering with BBBSWE to deliver this program to schools across Windsor-Essex. Teen Mentoring is one of the 7 different mentorship programs provided to the children and youth of our community through our Agency. 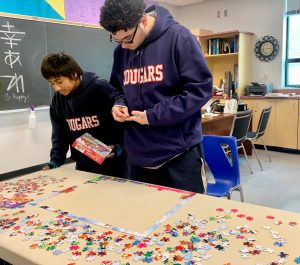 Aj (Mentor) and Emilio (Mentee) – mentorship can be as simple as hanging out and working on a puzzle.

Teen Mentoring is a program, which provides an elementary school student with a unique one to one relationship with a Teen Mentor. A Teen Mentor is a high school student selected by school personnel to participate based on their ability to be a positive role model. The program consists of a supervised weekly one-hour visit between a Teen Mentor and Mentee with the focus on building a friendship.

Rose Culmone – BBBSWE Director of Programs talked about the impact of Teen Mentoring on both mentor and mentee: ”Research has shown that teens can be powerful and effective mentors to younger children with an equally powerful impact for the teens.”

Teen Mentoring: Igniting Potential for Both Mentor and Mentee)

”The Teen Mentoring program is incredibly impactful in how it not only serves our Mentees, but our Mentors as well. During the first week of being matched, Mentors give their Mentee a tour of the secondary school, which also serves as an ‘ice breaker’ activity for them; however, it leads to a great deal of questions that ultimately helps prepare and/or provide relief for those Mentees starting high school and the Mentors for Post Secondary. The Mentors in the program have demonstrated dedication and responsibility for their Mentee as well as being able to relate with openness. A Mentee in the program expressed his appreciation for his Mentor by sharing that although he has struggled making friends with his peers; his Mentor is someone he feels is “actually there for [him].” said Dhai.

Investing in our young people yields tangible benefits in our community. Every dollar invested in programs like Teen Mentoring delivers up to $23.00 in benefits to the community.

Over the years RBC has been an incredible partner to BBBSWE. Taken as a whole, the return on investment impact of their community investments through our Agency are in excess of $1.5 MILLION. Their significant investment for 2020 Teen Mentoring programs quantified through this Community Return on Investment lens in the Leamington area alone is over $230,000.00. When considered across the entire region returns nearly $700,000 back to Windsor Essex.

Big Brothers Big Sisters of Windsor Essex is proud to be working with such amazing community partners like RBC and Cardinal Carter to help ignite potential in young people and build a stronger community.

January’s Mentor of the Month

Celebrate the Giving Season with us!